We recently looked at what actually happens when a patient orders a medicine through an online Canadian pharmacy and how the product delivered may not be what the patient ordered. Today, we’re taking it one step further and looking at a real example of one online pharmacy that was caught selling counterfeit medicines to U.S. consumers.

In 2013, Andrew Strempler, the founder of Canadian online pharmacy RxNorth, was sentenced to four years in prison after he was caught selling medicines that he falsely claimed were “in compliance with regulations in Canada, the United Kingdom and the United States.” Authorities discovered that Strempler was selling medicines he labeled as “Canadian” that actually came from other parts of the world – many of which were shipped through his warehouse in the Bahamas. When his warehouse was raided, authorities found transaction records showing more than 200,000 prescriptions had been filled with the mislabeled, poorly stored medicines, many of which were counterfeits. Seized records indicated that RxNorth’s customers were American patients. 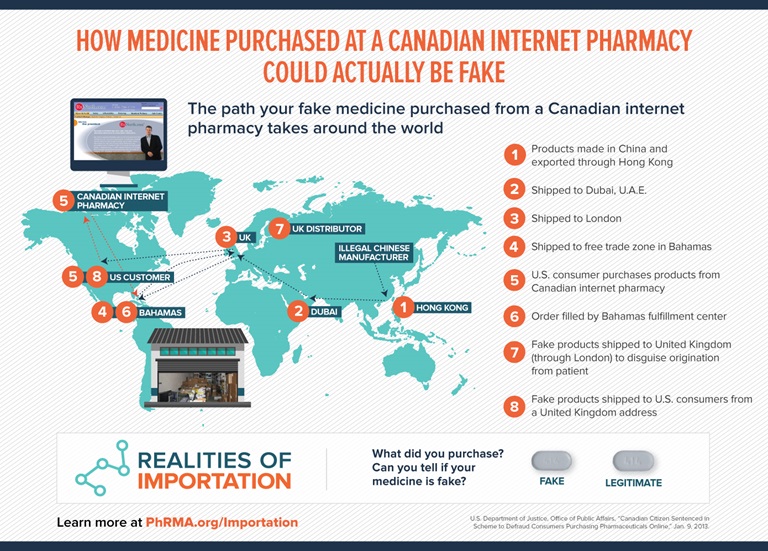 There are a number of ways medicines from overseas can be corrupted, and the increasing sophistication of counterfeiters and overseas drug sellers makes it hard to detect counterfeit or adulterated medicines – even for experts. They could be stored improperly at the wrong temperature; they could be replaced with imitations that look the same but are instead contaminated with unsafe materials like road paint or drywall; or they could be expired with the dates altered to seem valid but the potency may vary dramatically as a result.

Proposals to allow the importation of medicines unnecessarily increase the risk of counterfeit, adulterated medicines being delivered to Americans.